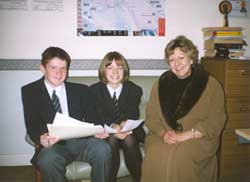 It was a cold and windy Saturday morning when our intrepid reporters (Kate Haley and Sean Serridge) went to conduct their exclusive interview with Janet Anderson, MP for Darwen and Rossendale.

What three things would you like to change about Rossendale? yes; she was limited to three... 1.I'd like to develop the tourist potential for Rossendale: I think one of our problems is that we don't have enough hotel accommodation and so on. It the most beautiful valley and yet when I tell people what my constituency is they don't know where it is. When I describe it to them they think that it is all dark satanic mills! Well, we are a bit of that, but there is the most beautiful countryside. Improving Rossendale's tourist potential would also bring more jobs.

2.I think we could do with a new hospital: I am convinced that we will always have a hospital in Rossendale, but what I would like to see is a community hospital, maybe a bit more central, that provided a few more services. With Rossendale General being the old workhouse I think it must be very expensive to run - it's the same with Queen's Park in Blackburn. If it were possible for the Health Trust to get the money together under some private finance initiative, then I think that would be great.

3.I would like to see pedestrian crossings on all the approach roads to the roundabout in the centre of Rawtenstall: I've been arguing this for years and I've never got anywhere. When people come across from Asda, they're dodging the traffic; crossing the road to the hospital, you have to dodge the traffic. I once saw a little boy running across that road and he slipped and fell - he was alright, but it just strikes me as highly dangerous. I've been told that you can't have pedestrian crossings that close to a roundabout, but I am not going to give up.

What would you do with Ilex Mill- surely that needs some attention?

We've just received £2.7m from the Heritage Lottery. I went to see the chair man (Lord Rothschild) and argued the case for some money. I said that the mill had been derelict for as long as I can remember and that we wanted to do something with it. He said that it was an awful lot of money and that if he gave it to us then Rossendale would probably never get any more money from the lottery Heritage Fund again. I said that we could live with that and so now we've got the money!

What's going to happen is we are going to put the Town Hall in there, the police will be there and we are trying to persuade the court to go in as well. It will become a proper kind of Community Municipal Building.

It was a textile house and the terraced houses that are next to it, which have been done up, were the workers houses. They are tiny and if you look inside the mill you will see some sort of blue boxes down the side of the wall. Those were the cantilever toilets. I can't remember exactly how they worked, but they sort of hung outside the wall of the mill - I wouldn't have liked to have used them.

About a third of the building will be for something like a museum. We are trying to decide what to do. It's a very ambitious scheme and I just hope it comes off.

Janet Anderson and The Millenium Dome:

How could we resist when Janet Aderson is the minister for the Millenium Dome? With so much money being spent on The Dome (which could well be paying for the hospitals which you said you would so much like for Rossendale) what relevance do you think it has for the young people in your constituency...

The Dome is for the whole country; I don't think that message has come across yet For example, the steel that was used for The Dome came from a firm in Bolton - it's the biggest contract they'd ever had for steel! We want to make it as easy as possible for people to get to the Dome from all parts of the country so it won't be too expensive.

But the Millennium money has contributed to all sorts of things around the country. There's a village called Turton which is in my constituency and I went there the other night because they've got Millennium money to put in floodlighting for the church. There were 400 people there when I turned on the lights - it was the most exciting thing that had happened in Turton for years.
What's really good about the Dome is it's becoming an international symbol and it will draw people from abroad. We must make sure it's as interesting and exciting as possible - the emphasis will be very much on learning: there will be two bodies; this couple sort of entwined and you'll be able to walk through their bodies and learn exactly how the human body functions.

Okay, so Janet was in full support of the Dome and it is money well-spent... but if she was given another 170m (the cost of building the Dome) to spend, what would she do with it?

I'd spend it on schools: school buildings and facilities.. In the early days of our office, one of the very simple things we did was give £1, 000 to every school to buy books. I went to a little school in Whitworth where it had just made the most enormous difference and the library was awash with new books. But, right across my constituency (and you know this as well as I do) there are children in buildings that were built last century and you know we shouldn't expect children to learn in those conditions.

Your job as spokesperson for the Dome and also Minister for Tourism seems to focus very heavily on London. Does this compromise your position as MP for Darwen and Rossendale?
I agree with you to this extent: London is very much the gateway to the rest of the country and what we haven't quite cracked is how to get people to move on from there into other parts. We are looking at a Destination Management System (it sounds terrible) which will make use of the internet, because there is so much here, you know: seaside holidays, rural holidays, Centre Parcs and attractions like Alton Towers and Blackpool Pleasure Beach. We've got to make sure that when people come to London they don't just stop there.

That's the challenge of my job really - I hope it's going to benefit us and, you know, I think the two are very much linked.