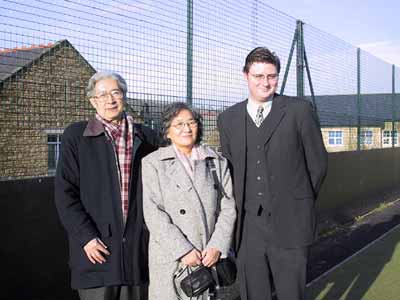 The school was privileged to welcome Professors Ling and Yang who specialise in English Literature at Beijing University, China, on Monday 16th December.

Ling and Yang came to England in order to develop their research into English Literature which they translate to Chinese ready for publication back at the University in Beijing. They specialise in Victorian Literature, especially Austen, Bronte and Dickens.

Translation can be a very difficult task. One only needs to think of the amount of humour that can be created out of puns which sometimes can simply be impossible to translate. One thing that Ling and Yang had found to be particularly difficult to translate were aspects of landscape and description that appear in the writers' work that they translate.

For example, a holly tree simply does not exist in China, and even if you explain that this is a type of tree there is the difficulty of explaining all of the connotations behind holly. A translator would need to convey that holly is used especially at Christmas as a decoration in homes and that this has warm and happy connotations, yet at the same time they would also have to explain that holly can also hurt you because it is sharp and if you prick yourself it can make you bleed. Life is very different in China from what they have seen in the UK. We can take our access to computers for granted in school. The professors do not have much access to computers even though they are professors at the Beijing Academy. However, they are part of the Thomas Hardy Association and they organise meetings and celebrations of Hardy's literature in China and can be found also at The Thomas Hardy Association where you can see examples of Chinese art work celebrating the work of Hardy and details of conferences that will be held in China and all things that are relevant to Thomas Hardy.

Everyone at BRGS would like to wish Ling and Yang all the best for the future when they return to China and, of course, a very Happy Christmas!