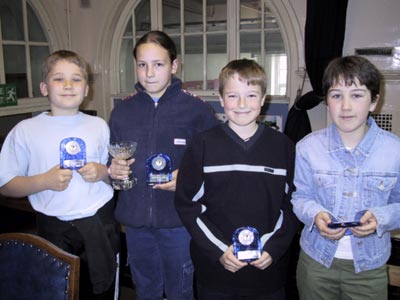 BRGS was transformed into Hogwart's School for a morning as local primary schools came to take part in the Maths Challenge.

18 teams took part in the challenge which consisted of 9 different tasks. Every time a team completed a task they were given a net that could be constructed into a part of Hogwart's School. The final challenge was to place the parts of the building together so that the name of the school could be seen on the front of the completed building.

The tasks ranged from quite simple tangrams to complex number and algebra problems. Although some of these problems might appear almost impossible at primary school level if placed in an ordinary maths text book, the role of Harry Potter that the pupils adopted and their quick wits meant that the pupils remained blissfully unaware of the complexity of the tasks they were carrying out.

This year the results were incredibly close, and Mrs. Kennedy who created, planned and led the morning had to decide the results on the quality of workmanship of the final boards as three teams had gained the same top score!

The winners of this year's Maths Challenge were... Waterfoot County Primary School.

All the teams that took part worked very hard and had a good morning and they should all be congratulated for taking part.