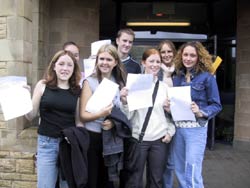 Mr Martyn Morris, headmaster, commented that the school was very pleased with the results as the year group was not regarded as being outstandingly able and the numbers in the sixth form have continued to rise rapidly, with 25 more students taking A-levels this year compared with last. Almost all the students have gained the university places that they wanted, which is a tribute to their hard work and that of the staff at the school.