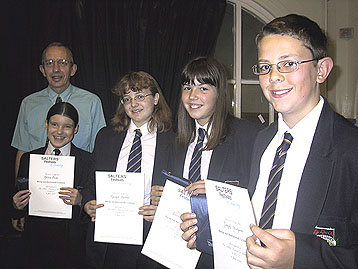 On Wednesday the 4th June, a team of four year 8 pupils travelled to UMISTto take part in one of 45 separate Salters' Festivals that have happened this year. In total nearly one thousand schools will have sent teams to one of these venues.

There were sixteen teams competing at this venue. They were from all over the North West of England and included such famous names as QEGS, Manchester Grammar and Bury Boys.

There were two separate practical events both held in the university laboratories.

The Salters' Challenge involved a forensic investigation and witness reports from the scene of a crime. Although the BRGS team identified the culprit, their report was not as good as some of the others and they were not placed in the top three.

The University Challenge was held after lunch. The teams had to produce a combination of chemicals which when mixed together cooled to exactly 10. 5 'C in exactly 60 seconds.

After several preliminary attempts, each of which improved on the one before. the team was ready to be judged.

They got it spot on and were declared the "coolest team" by Professor Dick Powellat the prize-giving held at the end of the day.

As a result of their achievements a £100 cheque will be sent to the school. Some of this money will be shared between the four team members and the remainder will be used to promote similar activities in the future.

My thanks and congratulations go to: