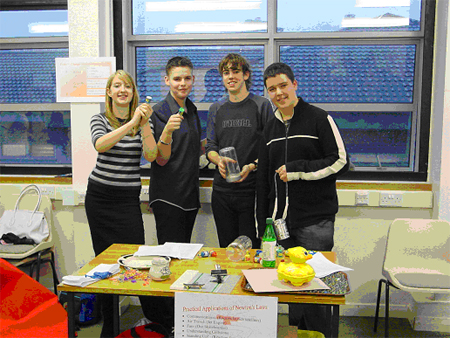 BRGS Win Through to Regional Final of Physics Competition.

Can you: Communicate physics to a non-scientist? Work as part of a team? Build a physics demonstration from items found around the home?

Nine students from BRGS participated in a competition requiring all of the above.

Paperclip Physics is a competition, organised by the Institute of Physics. The aim is to demonstrate to a non-scientist, an application or fundamental principle of physics using only items found in a typical home. The competition is open to students in years 11 and 12 and requires teams of 3 to 5 students.

Year 11 decided to explain all about eclipses. They were attracted to this topic by the promise of eating copious amounts of Jaffa Cakes, which were used to depict the Moon. Pictured below are the year 11 team L to R are: John Holland, Akif Hussein, Elliot Hurst, David Bewicke and Andrew Hoyle.

Year 12 decided to explain and demonstrate Newton’s Laws of Motion using a variety of demonstrations which included balloons, party poppers, candles in bottles, an amusing duck and a full place setting with table cloth! The team are pictured below: Lto R Katherine Grant, Sam Lynskey, Ben Smith and Martin Bracewell.

This was the first time that BRGS has entered the competition and the teams made two excellent presentations to the judges who comprised a professional physicist, a physics teacher and a non-physicist (who was the most important panel member). It was important to convince the non- physicist with a clear and simple explanation.

After a close run competition and a nail-biting wait, the judges announced the top three teams to go forward to the regional final. Year 11 had impressed the judges with their explanation of eclipses and they have won a place in the regional finals, which will be held in early March.

Well done to both teams and good luck to the year 11 team in the next round! 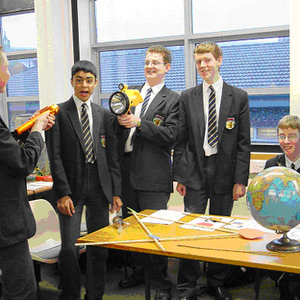 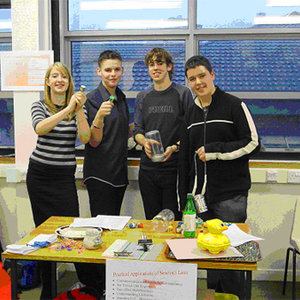 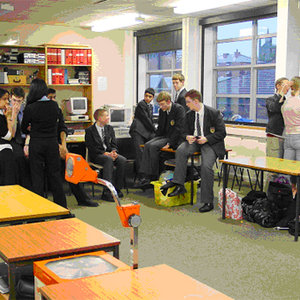