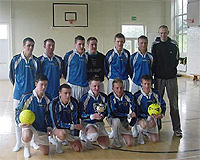 The U19 football team won the County Cup by achieving a hard-fought victory over Lytham St. Annes.

Earlier in the year they beat Clitheroe RGS in the quarter finals 4-2, and then St Theodore's in the semi-final 3-1.

The final saw BRGS going ahead in the second minute when we were awarded a penalty for pushing: Matthew Hayhurst calmly sent the goalkeeper the wrong way.

What followed was some outstanding defending as BRGS sat back and defended their lead. Lytham had much more of the possession, yet Sam Charlesworth was rarely troubled in goal. The last ten minutes and injury time were very tense with some scrambled defence; the 5 minute injury time seemed to last a week.

BRGS hung on, however, and won 1-0 to be crowned Lancashire Champions.