A Day to Remember for Mr Morris... 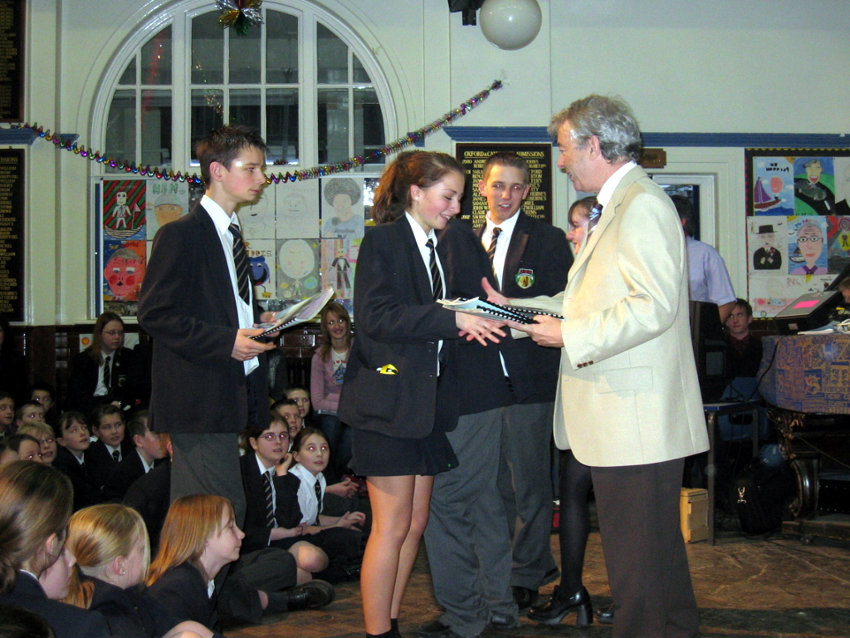 Friday 17th December was a significant day in the history of BRGS as it was Martyn Morris’s last day as headmaster. Mr. Morris was the fifth headmaster at BRGS since the school opened on its present site in 1913.

Mr. Morris had been headmaster at BRGS for 16 years and said: “Leaving will not be easy: BRGS, its staff, pupils and parents have been a massive part of my life. It is like a sense of bereavement, but I am proud of what we have achieved together.”

Mr. Morris and his wife, Linda, have moved to Devon where Mr. Morris will have more time for sailing and restoring classic cars. He is hoping to work a number of days a year training new headteachers at Manchester University.

See the portraits...As a surprise for Mr. Morris, students from all years had drawn portraits of Mr. Morris which covered practically every wall in the hall. The day started with a farewell assembly for years 7 to 11. Each year group made their own presentation with gifts and performances, the most intriguing one being ‘Morris dancing’!

The sixth form ‘goodbye assembly’ was equally entertaining with a puppet show by ‘Reach puppets’ and the jazz band conducted by Mr. Morris himself!

Traditionally, after five years at BRGS members of staff choose a reading for their farewell assembly. Mr. Morris chose the following anonymous poem, ‘Behold I Stand’.

Students gave Mr. Morris two fantastic leaving presents: a ‘School-in-a-Box’ which is a basic education kit catering for children caught in emergencies. The metal box is crammed full of exercise books, posters, chalk and other teaching materials. The box itself, can even be used as a blackboard. The other gift was a ‘chicken bank’ for villagers in South India where two chickens can provide the annual health insurance for a whole family.

We also said a sad adieu to Mrs. Pat Kirk, P.A. to the headmaster, for 15 years. Mrs. Kirk was responsible for the administration of many major functions of BRGS, not least the admissions to BRGS. Mr. Morris said: “It is the unsung heroes who keep the school together and ensure its success. Pat is just one of these. Her enthusiasm making the office sparkle and her unstinting devotion to BRGS will be missed.”

We wish Mr Morris, and Mrs Kirk, all the best for the future!

The portraits of Mr Morris

Tribute to Mr Morris in the farewell assemblies....

Photos of presentation to Mr Morris...