BRGS ARE UNDER 13s ROSSENDALE CUP CHAMPIONS (May 2005) 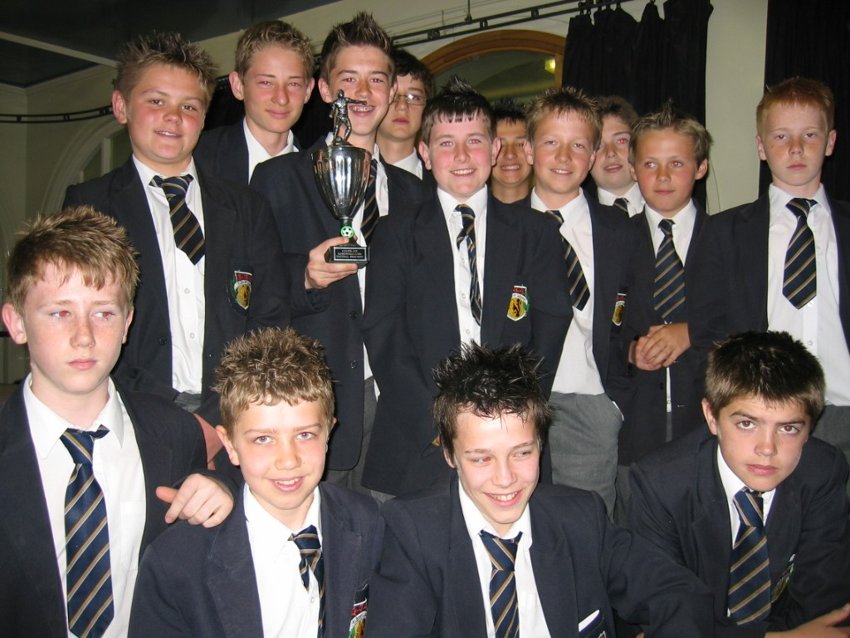 At 4.15pm on Wednesday 4th May 2005, All Saints playing fields saw the clash of arguably Rossendale's two strongest Under 15's school football teams.

All Saints School played host to the Year 10 BRGS football team, with both teams playing for the chance to win the Rossendale's Schools Under 15's Trophy. A tight match was expected, as previous encounters between the two teams were usually decided by a single goal. A tight match was what we received.

BRGS set out to pummel the All Saints goal, and they sure did that. Chance, after chance after chance. Elliot Connolly with a rasping effort, Joey Marcroft stinging the Keeper's fingers on a number of occasions, but all to no avail. The first goal when it came was unfortunately at the wrong end. A combination of poor marking from a set piece and a darting run from the All Saints full back, contributed to BRGS falling behind at the break to a well taken header. The character the team showed after half time was inspiring.

Pass after pass reached its target in the BRGS mid-field, and tackle after tackle in defence ensured that All Saints were definitely not going to get another. Then it happened. In the blink of an eye Olly Purslow rifled a shot into the roof of the net and Bacup were level. Continued pressure did not get its just rewards and at full time the teams were level.

Extra time was required to decide the game.BRGS picked-up where they left Qg with the defence winning every ball and the attackers creating glorious chances it was only a matter of time before there was a breakthrough. It came yet again through the boot of that man ... Olly Purslow. But BRGS was not content, and the other Olly, Olly Coldman, decided that Mr Purslow was not going to run away with the show. After picking the ball up outside the area he showed great strength to shrug off his marker and coolly stick the ball into the far corner . .. .. 3-1.

Now to the other end. After having so little to do, Joe Sipocz reacted superbly when he tipped a point blank strike around the post. The All Saints striker could not believe that his shot had been saved, and frankly neither could the remaining players. Then an almost exact replica of his earlier goal meant that Olly Coldman had an impressive two next to his name. Credit must be given to Zayne Hussain however, when he calmly placed the ball into the next field after coming on a substitute. I am sure he will agree that it was not a miss kick, but rather a calculated time wasting technique.

The final whistle blew and the loyal BRGS fans erupted into a frenzy of screaming. The Year 10 lads had become Rossendale Champions for a second year. Olly Purslow deservedly won the Man of the Match award. The match was won with commitment, desire and shear class throughout the team.

Well done to everyone who has been involved with the squad throughout the year.