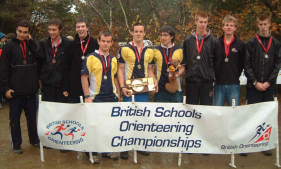 The competition was held at Hawley and Hornley, near Farnborough, and more that 1000 pupils competed in a weekend packed full of fun and orienteering.

The year 13 team of Liam Taylor, Alex Willis and Stephen Horrocks once again left the opposition trailing to win the competition for the second successive year. Also in the medals were the Year Nine girls with Lucy Horrocks, Evie McDermott and Heather Cudworth, who finished in third position. Sophie was also part of the Year 11 girls team, who finished fifth in the team event.

There was also a presentation to BRGS teacher Tom Gray, who received a special award for his long service to schools’ orienteering.

Another satisfying moment for Tom was when the boys received the mounted brass compass trophy for being national champions as, 40 years ago, Tom competed for the same trophy when he was a student at Dunfermline High School and his team was narrowly beaten by Alloa Academy.

For the latest News and Results go to:
BRGS Orienteering Website by Jamie Hoyle