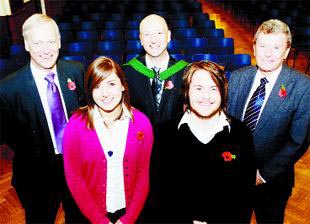 Year 11 students were rewarded for a year of excellence at an awards ceremony on Wednesday, November 4th. More than 50 students who excelled in various subjects, including Maths, Science, English, Geography, Drama, Music and History, were awarded prizes and certificates by ex-BRGS student Mr Geoff Driver, new Leader of Lancashire County Council.

Deputy headteacher Dr Edwards said: “This was the best-ever GCSE summer for BRGS. We were delighted with the overall success for the students, which reflected their hard work and the drive by the staff to reform teaching and learning styles. We look forward to continuing the partnership into the sixth form and welcoming all students who will be joining us.”