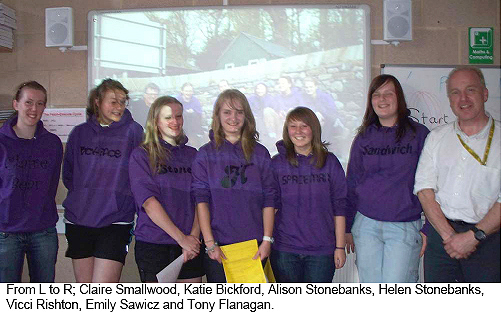 This intrepid group of girls, who came together three years ago on their Silver Award to form Team Mad Dog, have finally conquered their Gold Award expedition section.

Having fallen at the proverbial hurdle in the 2009 expedition to the Outer Hebrides through injuries to team members, Vicci Rishton and Emily Sawicz, were determined not to give up.

Undeterred, they have recently gone on to complete a four-day 85km trek around Cumbria with a total climb of 3900m (that’s almost 3 times the height of Ben Nevis!). Sadly, a recurring ligament injury to Emily’s knee meant she had to pull out again on the second day. Hopefully, it will be third time lucky for Emily when her physio is complete
The girls presented their project work – a detailed study of the major Lakes and Tarns encountered on their route. The talk was most informative and we all learned a little more about this beautiful part of England (including an account of the sunken gnomes of Wast Water!). The talk was given to friends and family of the group and to special guest Tony Flanagan, who is the County Outdoor Activities’ Advisor for Lancashire LEA.