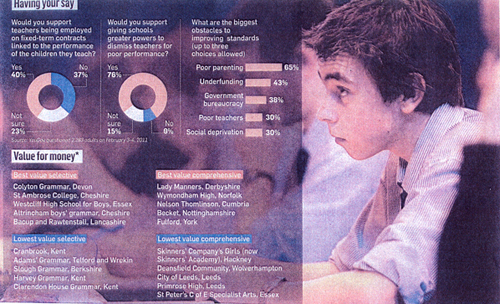 BRGS has featured in the news over recent weeks in the various league tables that have been published.

BRGS rated the top 19th state school in the country for A’ level results (analysed by average point score achieved).

83% of students at BRGS obtained the English Baccalaureate qualification against a national average of 15.6%.

The Sunday Times, ‘Superschools get top grades on a budget’, 6th February 2011

At GCSE level we also performed exceptionally well and 83% of our students obtained the new English Baccalaureate qualification (a measure of how many pupils achieve grades A*-C in five core subjects – maths, English, two science qualifications, a foreign language and either history or geography) against a national average of 15.6% and a Local Education Authority average of 14%.

Not only were we thrilled with the exam results we were also delighted by an article in the Sunday Times newspaper on the 6th February 2011 in which we were listed as one of the five top selective schools providing ‘value for money’ along with Colyton Grammar in Devon, St Ambrose College in Cheshire, Westcliff High Schools for Boys in Essex and Altrincham Boys’ Grammar in Cheshire.