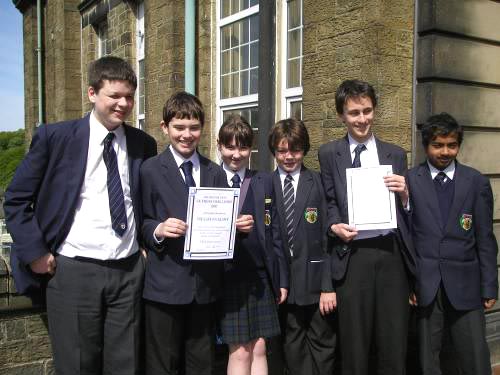 Following in the footsteps of chess notables like Tim Goddard, who reached the Gigafinal in Oldham and Shivali Kohli, who gained a place in the nationals in Sheffield, seven intrepid adventurers set out on the journey to Blackpool - not to eat the candy floss and ride the donkeys, but to pit their wits against the best chess players in the north west. Our heroes and heroine: Angelica Fitzpatrick, Chris Bretherton, Joe Collins, Asanish Kalyanasundaram, Matthew Hoyle, George Platt and Ben Atueyi, were faced with opponents who not only spent every waking hour playing chess, but were often a great deal older; Angelica Fitzpatrick (Year 7) played a sixth former.

However, our opponents were not aware of the BRGS team's secret weaponry - Mr Blacoe's patient tutelage and Mrs Ashworth's toffees and kitchen roll, don't ask! The results were impressive and the best in living memory! Chris Bretherton, Joe Collins and Matthew Hoyle were all one win short of qualifying for the Northern Final, some of them beating the U18 Champion, whilst Angelica Fitzpatrick (Suprema of her year), Asanish Kalyanasundaram, George Platt (Second in his year) and Ben Atueyi (Supremo for his year) played out of their skins to qualify for the Northern Final at Derby University on 16th July. Wish them luck!