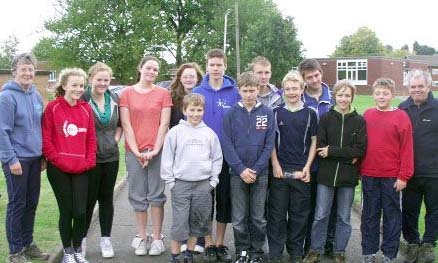 The Peter Palmer Relays are an annual event for junior orienteers.

Twenty-four teams of six runners ran a combined distance of over 30km per team – with the mass start for the first leg runners at 4.45am!

The first two legs were run in darkness with the orienteers using head torches to find their way round the course.

The course was set in a way that prevented following and, at the spectator control, Jamie had taken a short lead over Dominic.

At the changeover however, it was Dominic in front with the team in fourth place in the small clubs competition.

A disqualification by the Welsh team ERYRI on the next leg moved the club’s overall position to third with Alex Holland (Year 10) running in his first ever night leg.

At the next two change overs, Emily Jesson (Year 12) ran well.
It all came down to the last leg, the longest by far at 7.2km.

By the second spectator control Charlotte had built up a substantial lead over Phoebe but with tiredness setting in, Charlotte unfortunately mis-punched a control near to the end which disqualified the team.

All Phoebe had to do now was finish the course and with superhuman effort, she did just that.

The eventual winners of the small clubs category were MAROC who had came all the way from Inverness.

POW managed to pull away after the third leg to finish in second but Phoebe’s determination awarded the B team a credible third place.