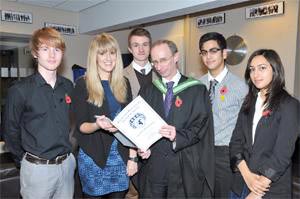 Alongside GCSE certificates, subject prizes were awarded as well as special awards for hard work and dedication. Guest of honour was former pupil and Sky News producer Katrina Bishop.

Acting Headteacher Mr. Elkington said: “We share the delight of our students’ in the wonderful GCSE results they have achieved. The hard work of the young people and their teachers’ has certainly paid off and they thoroughly deserve this high level of success. Out of the top 35 students, all of whom have gained five A* grades or more, it is pleasing to note that 25 of these are boys as we have been working towards narrowing the gender gap in line with national initiatives.”

Thank you to our P.T.A. for generously supporting our Year and Form Prizes on an annual basis.