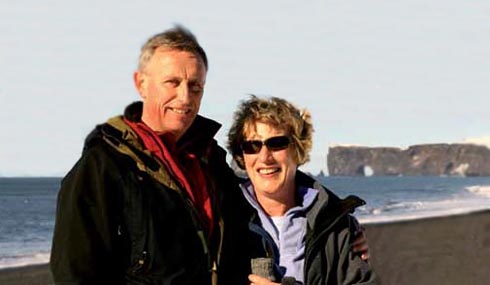 Mr Elkington (Director of Sixth Form) paid tribute to the enormous contribution made to BRGS by Mr and Mrs Edwards as we said farewell to them at the end of term just before Christmas, wishing them a well-deserved retirement from school life.

Mrs Edwards' association with BRGS stretches back to 1963 when she arrived at the school, in her own words as a ‘terrified and miserable year 7 pupil and left as an accomplished Fred Wilder potholer’.

She then went off to university, and returned to BRGS as a Geography teacher. Her two passions were pupils and fieldwork, and put the two together in the Yorkshire Dales and she was in her element: never happier than when standing in walking boots in a roaring gale explaining the exciting impact of glaciation!

More recently, Mrs Edwards served BRGS in a variety of ways, including up-dating the display work around school, helping out with fieldwork trips, and in so many other ways.

Mr Edwards has been with BRGS since 1993 joining us as Deputy Head responsible for examination work, data analysis and a whole host of other areas. Mr Edwards would tackle every problem with a calm, optimistic sense of humour, and was so admired by staff and students alike.

At the heart of Mr Edwards' involvement with BRGS was a love of teaching students and an enjoyment of sharing his knowledge with them, both in the classroom and out in the field. His knowledge and flair for fieldtrips was second to none!

We cannot thank them enough for all their hard work, dedication and commitment to all the pupils and staff of BRGS over the years, and they will be missed enormously by all. We wish them every happiness for a long and restful retirement.