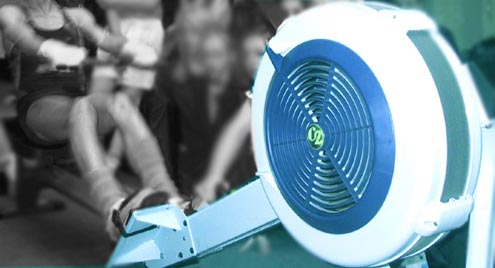 On the 23rd March Year 11 and 12 students took part in a sponsored 24 hour row to raise money for their charity expedition to Borneo later in the year.

The row was organised by Callan Lofthouse in Year 12 who is keen on rowing as a hobby.

Callan along with Dannielle Rivett drew up a rota for the 24 hours and the rowing commenced at 9am on Friday morning.

There were 9 involved in the row which included two rowers in tandem so there was no break on the change overs.

Throughout the day the students were supported by several students and teachers putting in some extra minutes.

Teachers included Mr Clarke, Mr Wiliamson, Mr Pigott and Mr Wyton who was unwittingly brought into rowing after he appeared in the gym for his Friday Lunch time jog.

Adam Clegg was one of the students supporting the team with a guest appearance on the rower. Adam who rows competitively put in an hour and managed an impressive 7km in 30 mins!

The team kept up the rowing throughout Friday night, (even managed to fit in a Chinese takeaway!) and completed the row at 9am on Saturday morning at a grand total of 290km!

Thanks to all those who donated and supported us throughout the day, especially Callan’s parents who provided 24 hour first aid and physiotherapy back up, but more importantly moral support and food!