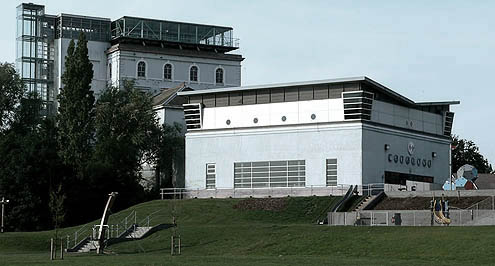 Science in Industry day at the Catalyst Museum.

A group of 40 Year 8 students were lucky enough to get the chance to attend the Science in Industry event at the Catalyst Museum, Widnes on 21st June.

The event was aimed at exploring all the different aspects of science in industry – including recycling, building bridges, making chemicals and mining for minerals, as well as many more.

The day included a free exploration of the museums galleries, where there are many interactive displays – one of the favourite displays was “Name That Smell” (not all of them were pleasant!). Another highlight was “How Hot Are You?” where students were encouraged to touch the heat sensitive pads to find out who was the hottest.

The students particularly enjoyed going in the glass lift up to the observatory, where one could imagine a spectacular view – however it being mid-summer and all, it was far too wet and cloudy to see much beyond the (very exciting) play area.

After a good play in the museum, we went to the 3D interactive cinema, where the students learnt about what goes into different products and the process of making them, such as mobile phones, cans and textiles. The importance of recycling was then explained and the students were given a “tour” of a can recycling plant where they could chose different questions to ask the people working in the plant, from how hot was the furnace, to what their favourite football team was.

Following lunch the students had a really exciting afternoon in workshops, where they got to interact with people who work in industry asking and answering questions and doing various activities. One of the most popular activities was bridge building, where they competed to make the best bridge using just scrap paper, paper straws and paper clips. The students also enjoyed making mini functioning wind turbines. Some students made key rings out of fantastic plastic – a plastic that has a very low melting point and sets really hard, very quickly, so can easily be remoulded into various shapes time and time again.

On return to school the students had a quick survey of what they thought of the day:

Best part: The 3D cinema and of course getting lots of freebies

What could be improved?: The bus not breaking down so we had more time!